Nattali Rize is slowly but surely building her profile as a household name in the global reggae community. For a few years now, she has been playing the major festivals and touring around the globe. Thanks to her move to Jamaica, she now breathes the vibes straight from reggae’s birthplace. And she releases music to critical acclaim – most recently her Rebel Frequency LP.

On Easter, I was able to talk to Nattali at the Munich stop of Reggaeville’s Easter Special tour. While I planned to release the conversation as a podcast initially, the acoustic messed up the recording to such an extend that I couldn’t force it upon your ears. Thus, I took the time to transcribe it (just as in Protoje’s case). Though we couldn’t go the full podcast length 1after finding out that I had to transcribe it, I was actually quite happy about that!, we covered some ground. Nattali talked about her life philosophy and important influences that guided her on that path. She also shared some details about her music creation process and told me about her experience working with reggae’s greatest rhythm section Sly & Robbie.

Without further ado, here’s our conversation (edited slightly for readability).

Me: I watched a couple of your interviews earlier. I found a very nice quote of yours: “Music is the path to freedom”. I was wondering – because you have a very political and mindful attitude, but at the same time, you are an artist and, like all of us, have to live within the system the world has built – how do you create and carve out that freedom for yourself? And what role does music play in it?

Nattali Rize: For me, music is the role. I feel like I’m born – we say incarnated – for that reason. Music speaks to me in a way that I just can’t do anything else. I love it! But also it’s not just the music but also the message in the music that is so strong and seems to get stronger and stronger – in terms of it becomes clearer and clearer to me. So, how do I get freedom and how does music play into it? Well, when you’re in the music, especially at live gigs, when you’re there, in the moment, sharing energy and creating – co-creating – new energy together, collectively, with the audience, with music, music that has intention and consciousness and energy in it, then we create a sense of freedom in the moment. Because in those moments the system doesn’t penetrate us. We lift our frequency higher. And there we get glimpses of what it’s like to just really feel free.

Nattali: You just balance it I think… for me, it is life. It is what I do and what I want to do. So, I am grateful! I walk a grateful path. Even though we are sitting in cars for hours, traveling for days and sometimes we don’t get to eat very well and sleep very much. But at the end of the day, we are doing what we love. So, I’m just ever grateful and that’s the thing I was built for. He build me in a small body… [laughs]

Me: You can cope with it!

Nattali: I can cope with airplanes, small chairs and I can find a bed anywhere, you know.

Me: One topic that comes up in your interviews all the time is, as I would summarize it, human growth and human potential. What were influential works in terms of books, literature or people who influenced you in this area?

Nattali: There have been a few. And I guess there have been a couple key ones from different angles which are interesting. The ones I would name are The Ancient Secret of the Flower of Life by Drunvalo Melchizedek, a very important book – everyone needs to read it! Then, David Icke’s The Biggest Secret, a very, very mind-opening book! You should read that as well!

Me: I didn’t read any of these so far…

Nattali: [laughs] Then there is a YouTube talk that kinda went viral and it was just an Australian guy, sitting in a chair and delivering some information to a group of friends that he had been researching for years. It’s called The Matrix Unveiled. These all happened at different times by the way. That particular YouTube talk really opened up a big can of worms for me. As far as the reality of the illusion of the system that we live in, how it’s actually just an illusion. If you listen to it, you’ll understand what I mean. As far as you start going down that rabbit hole, you can go as far as you want. So these three things were pivotal in shifting my mind. Before that, I was already aware, thanks to my upbringing and the influence of it. But the more I read and the more I learn, the more I know what I’ve yet to learn. And that’s exciting because I really like to read. I read a lot.

Me: You meditate as well, right? 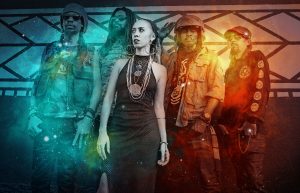 Me: Is there a special school of meditation you follow? For instance I’m aware of transcendental meditation…

Nattali: I really want to do transcendental meditation and am currently looking for a teacher.

Me: It’s really tough, I think, because you try to not think at all, for fifteen minutes

Nattali: [laughs] Yeah! But if you can do it, it’s awesome! But my meditation comes more from the yoga background. I’ve been doing yoga for quite some years now. It’s just simple meditation you practice in yoga and then carrying that on in my own, travelling musician kinda way. Wherever I can, whenever I can.

Me: This whole philosophy of yours, how does it influence your music. And I don’t mean the music broadly. I’m more interested in your actual work process – when you write a song, develop a song. Because I’ve heard you talk about the influence of one single drum. So, how is your process shaped by it?

Nattali: When you create a song initially, it’s just such an intuitive thing. Some writers have spoken about that, when there is a song, it’s like hanging in the air, just above you. And you have to be the open channel, so it can come down through you. When you realize that, you start to be really sensitive to those moments when a song is upon you. When you don’t tune in, you gonna miss it.

So I try to be really intuitive in those moments. And sometimes those moments last for weeks. Like, the past two weeks I’ve been inspired, just singing almost everything. I feel that way in Jamaica a lot of the time as well. There is a lot of creative energy that I’m sensitive to – in a positive way. The actual putting-together of the song, post the original idea and structure, will start us to get really thinking about it. That’s when we go for the sound we like and the elements we think serve the initial inspiration best.

Me: How hands-on are you in your music? I saw you outside at soundcheck. You were really hands-on there. Most artists wouldn’t plug-in cables themselves. But you did. Are you the same when creating music?

Nattali: Yeah, yeah! I’m really hands-on. I co-produce a lot. Like on the new album, me and OneRebel co-produced a lot of it. A few other songs are produced by some other crews, Notis and Lotek. But yeah, I’ve always been really, really hands-on with it.

Me: I have read somewhere, that you worked with Sly & Robbie?

Me: How was this experience?

Nattali: Amazing! Especially because it was also my first visit to Jamaica. To go there and work with Sly & Robbie – and Sly is one of my favorite drummers for a long time! – and than having this experience of going to the studio with some legends… And not only that, but also people you really admire. Just such lovely, humble, killer musicians! All the levels are there. It was incredible! I always try to catch up with them as much as possible. 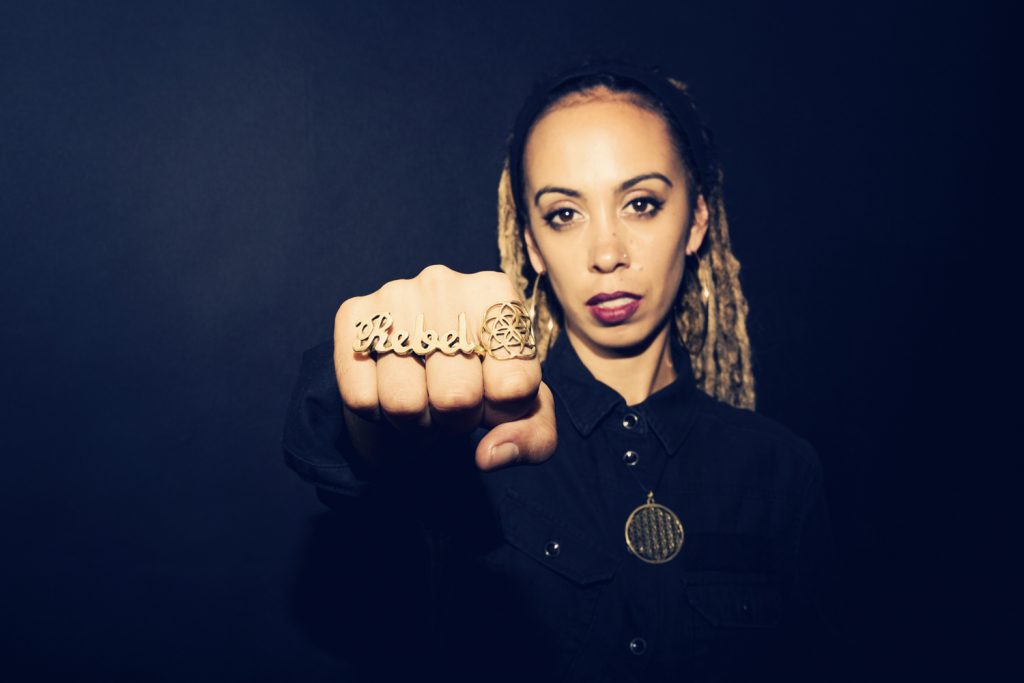 Me: You must have learned a lot?!

Nattali: Definitely! We visited Jamaica to record vocals for an album with Blue King Brown. And that whole trip, I just learned lots and lots and lots.

Me: Any anecdote that comes to mind when you think about working with Sly & Robbie?

Nattali: The first thing we did was Sly asked to hear some of the songs. He said: “Gimme the vocals of that one and that one!”. Then he took away all the instruments we had and just started with only the vocals and built the track from that. So we just recorded hours in a top-notch studio in Australia – with all these beautiful vintage mics, a full band and a horns section – and we play it and he’s like: “get rid of all the band” [laughs]. And then he went on to create the whole thing. That was like wow, that’s cool!

Me: And then you decided to move to Jamaica a couple of years ago. I think for most Reggae fans around the globe it’s that Mekka-like place. Everybody probably has the dream to move there. But how is it actually to move to Jamaica? I suppose it’s probably not like what you imagine. It’s a special place and probably quite different from Australia, right?

Nattali: Very different to Australia. See, having had visits to Jamaica twice before moving, I kinda had an idea. It was the second visit when we were really sussing it out as to whether we feel like we could make the move. And it was just the most awesome time. So I was like “I guess I’m coming!” [laughs]

This is absolutely where I wanna be, where I need to be right now. Musically, as a person, surrounded by this artistic, creative community whose art is resonating with me more than anywhere I’ve experienced. I love music from everywhere around the world. But my heart is like a magnet towards reggae. So, to be in the country where it comes from, makes sense to me. And it felt right and still does.

Me: But were there any everyday-things you really had to accommodate to? Like, what would be your top tips if I told you: “Hey, I’m planning to move to Jamaica. What should I keep in mind or be aware of?”

Nattali: Well, for me it’s like this: If you go there with the right attitude and the right intentions and the right vibe, then you gonna find your way easy enough. Because everyone is really tuned into levels there. And people there, they love people and they love music. There is such a great and supportive artistic community in Jamaica, that if you are an artist coming there, you just need to make some connections and link up. Just be open-hearted and open-minded and ready to learn.

Me: It was a pleasure!

This website uses cookies to improve your experience. We'll assume you're ok with this, but you can opt-out if you wish.Accept Read More