Yesterday, I stopped by at the Munich tour stop of Reggaeville’s Easter Special. I had a great time, witnessed energetic performances by Nattali Rize, Protoje and Mr. Vegas, and met some very nice people. There are still shows over the entire weekend -in Hamburg, Dortmund and Mannheim – and I’d recommend going. You’ll find more details below.

Thanks to the lovely folks at Reggaeville, I was able to do a couple of interviews as well. For the one here, I sat down with Protoje. We talked about his current single Blood Money, and about being an artist in times of global insanity. I also asked him about the A side of his Royalty Free project – he released Royalty Free (Side B) last year, and I was wondering about the other half. More on this below.

But before, a bit of inside baseball for context: I think I have hardly ever experienced a show where everything went as planned. Some large festivals, with their large team, sometimes, catch a break and have a lucky day. But even they regularly struggle with the minutiae of organizing such an event.

There are the logistics: Artists and equipment need to get to the location. It sounds easy in theory, but it’s not. Stones are thrown in your way by, among other things: traffic, flight delays, hangovers. Then, there is the technology. It’s not enough for the equipment to be there – it also has to work! In short: There are many variables in play and you can’t control them all. Looking at it from this perspective, it’s almost astonishing that many shows go reasonably well!

And so did yesterday’s show. While one of the organizers, at one point, wondered why he had even tried to put together a detailed schedule for all the prep work – from interviews to soundcheck – it all worked out in the end. Fan’s got to see great shows by all the acts. But the minor hiccups earlier had a ripple effect: My 1and everybody else’s. Companionship helps in hard times like these ^^ Protoje interview was moved from 5:30 to 2 am.

Which is important for two reasons: It’s a good illustration of the work involved in being an artist. Ask yourself: How much would you like to sit down and talk to a couple of strangers, at two in the morning, after you just invested a lot of energy in your show? Most people’s response would certainly be: eff off! And that’s probably not an unreasonable statement. So, we as fans should never forget to be super grateful. Particularly in niche genres like reggae, where most artists don’t get rich – but don’t work less than any pop superstar. They truly dweet for the love!

The second reason I pointed out all the above: When we sat down, the Mr. Vegas show was still going on outside. I wanted to release the interview as a podcast and did it in that style. Alas, the recording didn’t turn out in the usual quality. Thus, I decided to transcribe it instead. I edited it only slightly for readability and tried to keep the conversational style alive.

So, without further ado, here’s my interview with Protoje:

Me: In an interview, I saw you talking about the sensationalism that is currently going on in the media. And obviously our world is at a fragile point, I would say. We have Trump in the US, right wing parties rising all over Europe and stuff like that. Now, you as an artist are conscious, you do political music. What is the role of an artist in such a time in your eyes?

For me, reggae music is at its best when it is talking about social injustice, when it’s lifting the people’s mind spiritually. I think in this time now, it’s important for the artist to make music that is grounding, make music that is a reality. Because right now, reality is a blur.

Me: Do you think we are going to see quote-unquote “revolutionary music” come back?

Protoje: It has to. Anytime the world is in crisis, that’s what happens. Cause people are conscious. People right now spend their days thinking about these things. They have to think about it. Because you wake up today, bombs are dropped in Afghanistan, tomorrow something else [happens]. You have to think about what your place in this world is.

Me: You have this new single – well, not that new, but quite new – Blood Money. I found one line particularly interesting in there. You sing: „North coast resort and car dealership / The construction company dem just don’t legit“. And I was wondering, cause this line is pointing fingers at things in Jamaica that actually happen there, was there any pushback? Was it dangerous to say those things?

Protoje: Hmm, I don’t know. Some people think so

Me: But you didn’t get threats or something?

Protoje: Not yet. [laughs]

Me: Were you worried when you put it out there?

Protoje: No, because I just write what comes to my mind. Something happens and, you know, it’s life. You can’t live your life worrying about what people may do.

Me: For the people who don’t know the song: The lyrics are quite Jamaica-specific. But I think the song is, at the same time, universally applicable. Now, I was wondering, when you write it – because you are an international artist, people listen to your music all over the world – are you conscious about “targeting” and your audience in your songwriting? Did you think “I wanna do it specifically for Jamaica”?

Protoje: [pauses] I wanted to use Jamaica as the metaphor for the world. I used Jamaica as… It’s like writing an essay. I wrote it about Jamaica, but knowing that it’s very global. So it’s just a metaphor for what’s happening in the world. With Jamaica as the example where you can switch “Come take a look inna Jamaica” to anywhere and you’ll find these things still applicable globally.

Me: In Germany, we have a development that we have a roots reggae scene and we have a dancehall scene which are very distinct. I saw you in an interview say “Well, it’s one. It’s all Jamaican music”.

Me: What would be your message to people who try to separate between both kinds of music?

Protoje: I think, people are trying to separate it because of the messages. Some People don’t wanna hear certain things.

Protoje: Right. But say for example Chronixx. How do you call him a reggae artist? His new song Likes is very dancehall. We are blurring the lines here. He’s just an artist that makes great music. I want to be seen as an artist that makes great music. There is dancehall in my music, there is hip hop in there, there is rock ‘n’ roll, there is reggae. So for me it’s all Jamaican music. You may like this artist or you may not like this artist. Take an artist like Assassin – Agent Sasco – what do you call him?

Protoje: Exactly. He was just here on tour. So you come and you see: it’s not about division, it’s about inclusion.

Me: I just witnessed your stage performance – which was a great show by the way. You are one of the quote-unquote “Reggae Revival” artists. But I always think that you have a more distinct sound. You have influences from beyond reggae. What were the things that influenced your sound?

Me: I even was reminded of Jamiroquai a couple of times during the show thanks to the bassline.

Protoje: [starts humming/singing the Virtual Insanity hook] I used to love that song

Me: Okay, since it’s late, last question. You did quite an interesting project last year [editors note: Royalty Free], when you decided to only release the “B side” online. I thought that’s pretty interesting. You didn’t release the A side yet, did you?

Me: Is it still going to come out?

Protoje: It’s going to come out. It would have come out this year if it wasn’t for Blood Money. Blood Money just came and it happened and we just put it out in a crowded space. So, maybe, sometime. We’ll see what happens. But it’s there, it exists.

Me: So what was the idea behind just releasing the B side? You’re experimental in that.

Protoje: Just to try something different, something new. I had certain songs I wanted to come right away. But those songs were tracks six to ten. I really wanted Used To Be My Life out, and I wanted Can’t Feel No Way out. So I couldn’t release the A side, you know what I mean. I had to release the second side. So I just put it out.

Me: And you released it as free streaming on Soundcloud. Is the A side going to be a release for sale?

Me: I thought you are probably going to release the A side only on vinyl. You know, first you go only streaming and then only vinyl.

Me: Okay, thank you so much! It’s late, you still have to travel, so I’ll let you go.

And here are all the details on the remaining Reggaeville Easter Special shows: 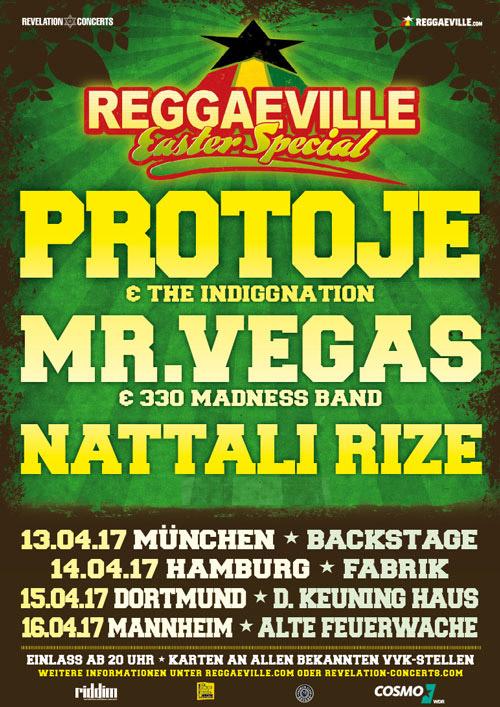 The mighty Midnight Raver has a great piece about Skip Marleys signing at Island Records. I originally started to write a comment but as…

This website uses cookies to improve your experience. We'll assume you're ok with this, but you can opt-out if you wish.Accept Read More